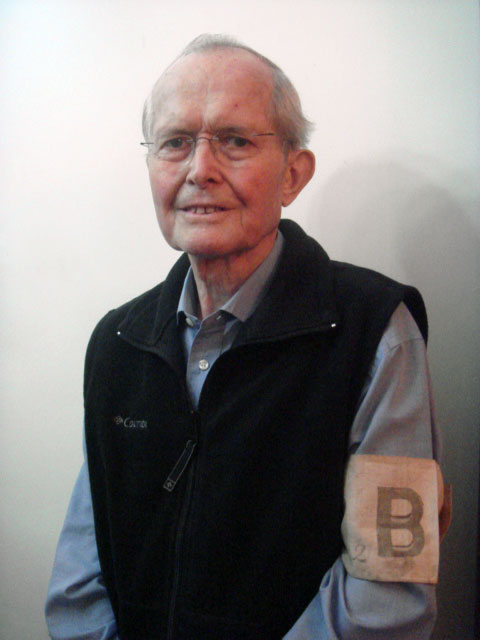 Former internees joined singers and dancers on the stage to applaud the theatrical performance that ended the August 17 celebration. For a finale, the troop sang Auld Lang Syne.

A wall in the new park celebrates American liberators.

Mary Taylor Previte and James Taylor stand outside the bedroom occupied by James Taylor. Weifang officials have renovated the bedrooms and saved the block from demolition.

James Taylor visits a room in Block 60 where he lived with Grandpa Herbert Taylor.

The 2nd floor bedroom of the hospital where Mary Taylor Previte lived with Chefoo school girls in the Lower School Dormitory.

The basketball field outside the hospital has been transformed with flowers and shrubs.

This sculpture stands in the entrance of the Weihsien Exhibit Hall.

James Taylor at the monument to peace which includes engraved names of every internee.

The Eric Liddell I knew

Eric Liddell was my hero long before the 1981 Academy Award winning movie, Chariots of Fire, brought him to the attention of the world. Interned together in the Japanese concentration camp in Shandong, Weifang, during the War of Resistance, I was mesmerized as "Uncle" Eric gathered us boys around and ...

Beyond the Chariots of Fire

What was Eric Liddell’s secret in moving from success to significance?

In 1944 and 1945, James “Jamie” Taylor, 14 years old, filled a 4" x 6" notebook with carefully-penned observations – about putting his hand into a sparrow's nest and finding babies, counting bustards flying overhead, welcoming flowers that announced the spring, listening to cicadas beginning to buzz, numbering the leaves sprouting on a plant. Logged to earn his Boy Scout Naturalist badge, he wrote ordinary, boyish stuff ....