Leaflets dropped by the U.S. Air Force on Camps in China, advising that the Japanese Government had surrendered.

The JAPANESE Government has surrendered. You will be evacuated by ALLIED NATIONS forces as soon as-possible. ... etc.

On August 17 the Duck Team proceeded by air to Weihsien, China and after reconnaissance from, their plane located the Civilian Assembly Camp and jumped to begin their mission.

They were greeted by the civilian internees who rushed out past the Japanese guards to welcome the parachuting men. Major Staiger immediately ...

Sir,
No formal thanks can properly express or convey the tremendous pleasure and gratitude that all the members of this Camp feel for the supplies which Squadrons under your command dropped for us on two recent flights over this area.
After 2½ years of internment ...

Dear Major Staiger,
Now that your particular Mission is completed, we, the elected representatives of those interned in this camp would like to express, however inadequately, the depth of admiration and gratitude which is felt towards you and your group by everyone in Weihsien.
The memory of your arrival on August 17th is one ...

... "We want each of you to know that any success achieved in the performance of our duties, from the moment of our arrival to the completion of our mission, is largely due to the excellent administration organisation already in existence and the complete cooperation so freely and cheerfully displayed by all on our behalf.
We feel that the attitude of the internees

1) The Emperor of the Japanese Imperial Government has surrendered unconditionally to the Allies, and the detailed regulations regarding the cessation of war is now being negotiated between the Japanese Govt. and the governments of the various Allies as listed here below.
2) All Allied POWs and non combatant people taken prisoner are to contact ... etc. ... 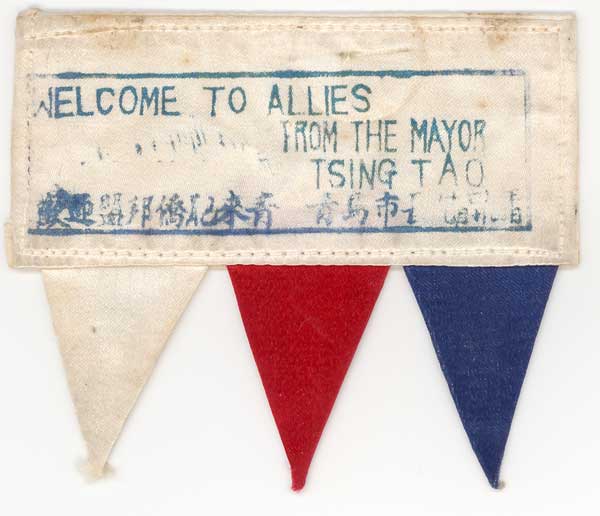 This badge was given to internees arriving by train in Tsingtao from Weihsien after release. It is a welcome by the Mayor of the town.
Norman Cliff, June 12, 2006 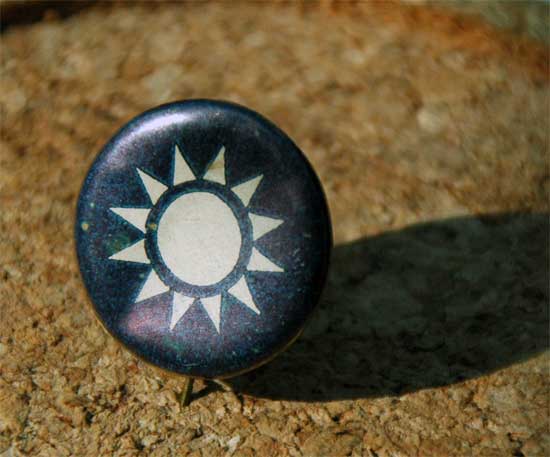 A Chinese pin-badge given to us in Tsingtao, 1945