THE END OF THE WAR AT LAST -
On 8 August, 1945, America dropped an atomic bomb on Hiroshima, and three days later on Nagasaki. On 10 August Japan surrendered.
In the internment camps of China were some 11,000 prisoners, who had been struggling to survive with war conditions having dragged on month after month. Their health and morale were ...

Whilst the area occupied and/or controlled by the Communist Forces far exceeds that portion of the country to which I shall refer, I confine my comments to areas of which, through residence and travel, I have personal knowledge. etc. ...

Return To Parents
Children Interned By Japanese
The happiest people in Durban yesterday were the Rev. and Mrs. H. S. Cliff, who up to Japan’s march into China had been missionaries there for 20 odd years.
Meeting the B.O.A.C. flying boat, they had come to welcome their three ...

D I A R Y
My trip to Chefoo, Communist-held port on the North banks of Shantung Peninsula.

JANUARY 28
We have talked about going to Chefoo for some time. Jim, ― (Ensign James Moore, my Commanding Officer) ― is especially keen to visit this port, as it represents his "old home town". His mother ...

"Very proud of their new outfits are Marjory Windsor, Edith Bell, Marjorie Harrison and Agnes Bell. They were given the clothes by the Red Cross immediately after their release, and everything fitted beautifully. 'It wasn't possible to get clothes for the boys right away, so American soldiers fitted them out in army wear. 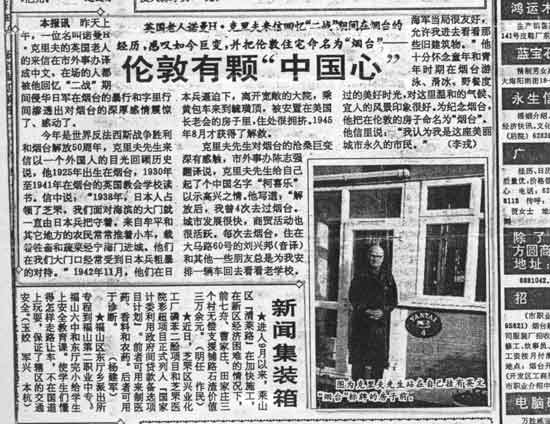 There is a Chinese Heart in London 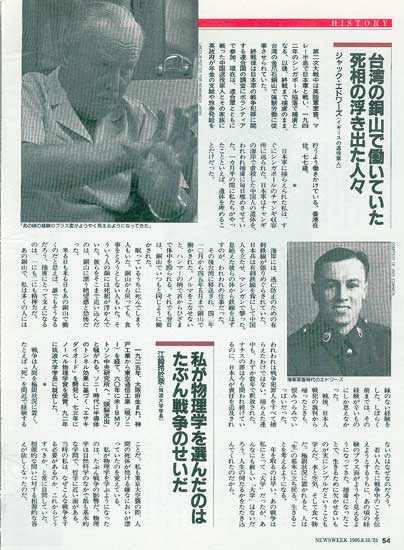 The faces of the people who worked in the Taiwan copper mines reflected the shadow of death.

A British army sergeant during the Second World War. He fought the Japanese army on the Malay peninsula and he was captured at the fall of Singapore in 1942. After which, ... 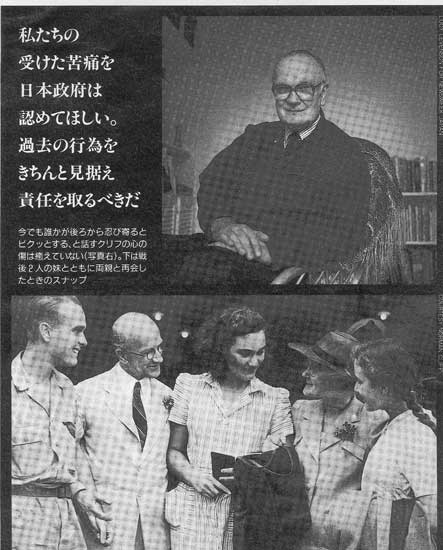 Mr Cliff was 17 years old at the boarding school for missionary women at the (Chinese town).
On the way between the schools by boat, Mr Cliff and his colleagues scarcely had enough food to eat. They were pushed into the filthy hatch. "There were rats running over our bodies, it was really hopeless."
Mr Cliffs parents were missionaries in Henan, when the Pacific War started, they escaped ... 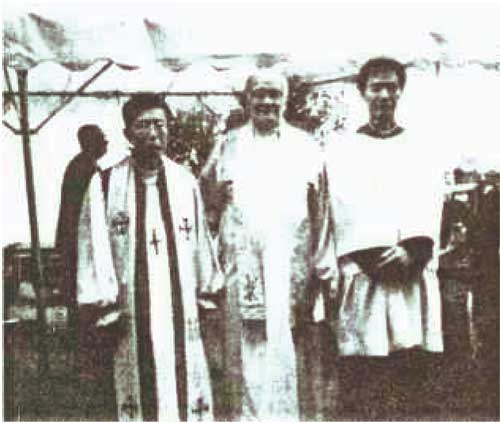 Norman Cliff takes us on....
A journey to Reconciliation
Reform – November 1997

The mighty roar of London's traffic was silenced for fifteen minutes on 15 August 1996. Police held up the northbound traffic while Messrs Bill Holtham and Arthur Titherington laid wreaths at the Cenotaph in memory of military POWs who died in Japanese camps. ...