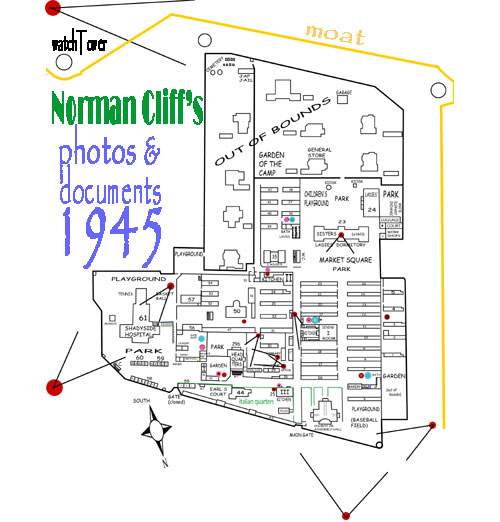 The Hospital .
Tania and Sylvia Tchoo standing in front of the hospital.
The top two floors housed the pupils of the Chefoo School.

Photo of a corner watchtower taken from outside the camp

The bell which called the internees to Rollcall twice a day.

Tania Tchoo standing outside Kitchen 1, which fed about 700 people. The food was cooked in large caldrons, but the quantity was quite inadequate.

Yangchow C members may remember Peter Jewell, who was interned there with his mother and cousins, June and Keith Martin. During visits to USA, as an RAF pilot, he researched the POW Supply flying missions by USAAF in September 1945.
Their most perplexing problem was to determine the exact ...

An aerial view of part of the camp, showing the single room family accomodation.
This picture was taken from the tower of Block-23.

A family outside their small room

One of the success stories of the internement period was the formation of groups of Scouts, Guides, Brownies and Cubs..

Coalballs drying in the sun ...

I went by bus to Weifang, and was met by Mr. Sui Shude, a government official who is in charge of the forthcoming celebrations. This relates ...

The approach to Weihsien Camp over a rough muddy road.

The Hospital and a Japanese watchtower, taken from outside the camp.
The top two floors housed the pupils of the Chefoo School.

One of the success stories of the internement period was the formation of groups of Scouts, Guides, Brownies and Cubs..

Two of the Camp's guard-towers seen from outside!